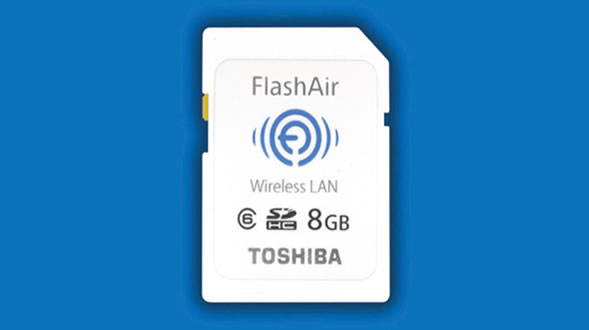 We really like technology that makes things easier and frees us from arduous tasks. There is something extremely frustrating, after a hard day of shooting, to have to take your SD card out of the camera and plug it into your computer to upload your pictures, or god forbid fishing out a USB cable for your camera. That’s why we love the whole concept of Eye-Fi‘s wireless SD cards, which send photos directly from your camera over the air to your computer or Wi-Fi enabled devices.

Toshiba thought, well what happens if you actually want to send pictures or other files the other way around, and that’s how the creation of their FlashAir SDHC card came about. As Toshiba envisions it, this will enable two-way transfers between cards, and the devices hosting them, using embedded wireless LAN technology for tasks such as sharing photos between two cameras or pulling photos to your camera from photo sharing sites. Toshiba is also claiming, lower power consumption than other cards with similar functions.

We dont really see however much benefit in moving photos into your camera, perhaps this would be more suited for uploading/sharing on devices such as tablets and smartphones, however most of these accept microSD cards while the FlashAir is a full-sized SD card, for now.

An 8GB Class 6 SDHC FlashAir card will begin selling in February 2012, which is a bit too long if you ask us, for around $90 — similar price to the equivalent Eye-Fi cards.

Now, just bump it up to at least 16GB, Class 10 and include WPS geo-tagging and we are sold.