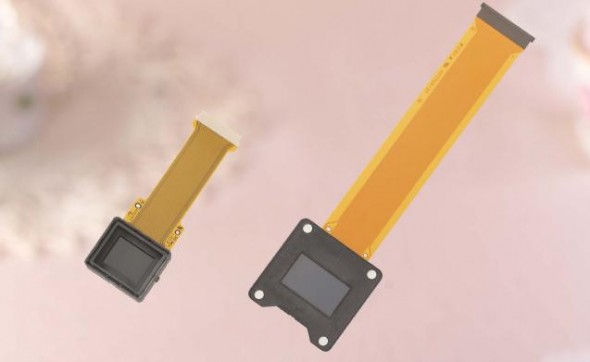 To put things into perspective, the 0.5″ ECX331A with a resolution of 1024×768 (RGB) has a pixel pitch of just 9.9μm. In comparison, the iPhone 4S with a 3.5″ 960×640 resolution retina display has a pixel pitch of 77.1μm. In layman terms, pixel pitch measures the size of a pixel; the smaller it is the harder it will be for your eyes to distinguish between them and the sharper and more lifelike the image. That means that each individual pixel (made up of three subpixels, Red, Green and Blue) on Sony’s OLED panel is almost 8 times smaller than that of the iPhone 4S display. This makes them ideal for applications where you need a compact design and you would put your eyes very close to the display, such as EVFs and head-mounted displays.

We’ve already declared our awe when we first tested the Sony A65’s EVF (shared with the A77 and NEX-7). Testing the Sony Alpha A65 digital camera we were amazed at the sharpness and color quality of the OLED EVF. You can see below our attempt to capture the output from the 0.5-inch OLED viewfinder found in the latest Sony Alpha and NEX cameras:

Simply put, it is by the far the best EVF out there.

How about the 0.7-inch ECX332A? Well, we’ve already mentioned that a pair of these panels can be found in Sony’s HMZ-T1 head-mounted display. With each panel displaying a different image to each eye, you get crosstalk-free 3D and a perceived image size equivalent to watching a 720-inch screen from 20 meters away. The ECX332A has a slightly lower pixel density, with a 12.0μm pixel pitch, but still very dense. Because it offers a native 720p resolution, it’s ideal for video applications.

Now, although our Japanese is a little shaky, from what we could make out, it seems that Sony is now starting to sell the wonder panels to other manufacturers as well. If that is the case, then the future of electronic viewfinders is bright (literally). And you know what, we’re crossing our fingers for one of these OLED panels to find its way into the rumored Panasonic EVF2 external viewfinder for the GX1 Micro Four Thirds camera.