Drum-roll, please. The Motorola Droid Bionic has finally hit Verizon and is today available to order for $300 with a two year contract. We’ve been expecting the 4.3-inch, dual-core 1GHz, 4G LTE Android phone from Motorola for a while now and although it’s late to the party, we’re glad it’s finally here.

If you’ve been holding your breath for this, head over to Verizon’s page to order yours today; or you can wait just a bit longer for the iPhone 5 or even the Nexus/Droid Prime, which shouldn’t be too far off.
END_OF_DOCUMENT_TOKEN_TO_BE_REPLACED 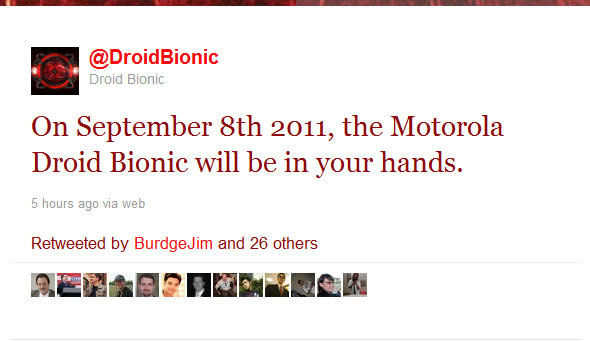 UPDATE: Verizon has come out saying that the @DroidBionic twitter account is not theirs, though it doesn’t officially refute or confirm rumors on release timing. The Bionic saga continues.
END_OF_DOCUMENT_TOKEN_TO_BE_REPLACED