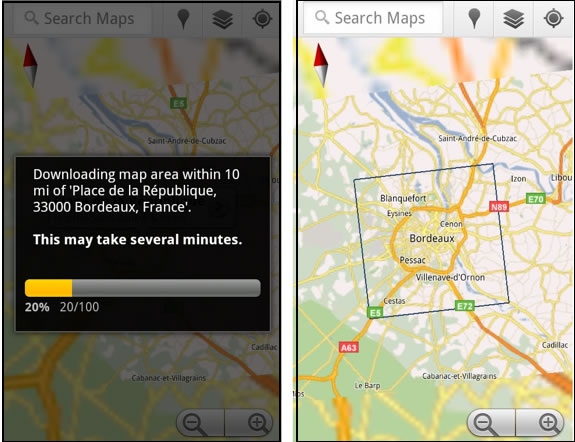 One of our biggest frustrations with Google Maps for devices has been that you couldn’t set the application to pre-download a specific area, city or country. So, if you were travelling to, let’s say France, with no data access — unless you opted to enable very costly data roaming — what you could end up looking at was a not-so-helpful blurry image, like the one below.

This was especially frustrating as you need the maps the most when you are in new and unfamiliar territory, like a foreign country. Sure there were ways around it, for example manually caching the maps — before going somewhere you could load the area in Google Maps on Wi-Fi and then pan and zoom around waiting for each bit of map to load — but that required planning and patience.

So, we were very happy to find out that, the latest Google Maps update, 5.7, for Android includes a new Lab feature titled ‘Download map area’; which essentially allows you to search and download a specific map area withing 10 miles of a given point. Sure you still can’t download an entire country in one go but it’s certainly a start and gives you offline access to entire cities through a couple of simple touches.

Because maps in Google Maps are not downloaded as images but rather vectors, the time required to download a map is only 1-2 minutes and maps should take little space on your device.

Enabling the feature and downloading maps is a simple process which we outline below:

First make sure you have the latest version of Google Maps for Android, i.e. version 5.7+.

Launch the Google Maps app, press the Android option key, then ‘…More’ and then Labs.

You should see the new feature titled, ‘Download map area’; make sure that it’s checked by touching it.

To download maps, search for place or city in the search box. The place will show up in the maps with the familiar white title box. Touch on the title box and you should see at the bottom of the menu the ‘Download map area’ option. Touch it, wait and voila!

UPDATE: Google has renamed this function in newer versions of Google Maps. Now you should look for the ‘Precache map area’ feature.