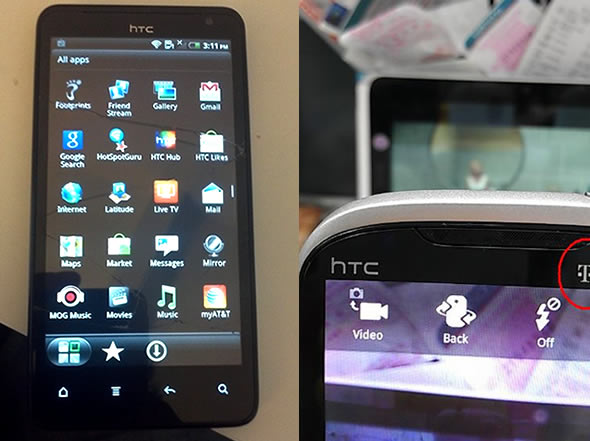 We’re guessing people over at HTC never have any holidays, since the Taiwanese manufacturer keeps on churning new smartphones. The latest devices to have found their way out on ‘the Internets’ are the 4.5-inch HTC Holiday — fitting name — behemoth and the 1.5GHz dual-core Ruby. We have juicy details and pictures of the two handsets waiting for you after the break.

The HTC Holiday is poised to become a bigger brother to the HTC Sensation, sporting a 4.5-inch qHD (960×540 resolution) display with 1GB of RAM, 8MP rear and 1.3MP front cameras. The Holiday is said to be released on AT&T. The phone should be running Android Gingerbread 2.3.4 on a 1.2GHz dual-core Qualcomm MSM8660. From the pictures we can also make out a set of pin ports which we would guess could be used for docking and charging the phone.

If the specs we have are real, the HTC Ruby will become the jewel in HTC’s crown running an incredible 1.5GHz dual-core Qualcomm Snapdragon CPU with Adreno graphics. The Ruby, which is rumored to be named HTC Amaze when it hits T-Mobile stateside, should be sporting a 4.3-inch qHD (960×540) touchscreen, an 8MP rear and 2MP front cameras and have a 1GB of RAM. The device is also rumored to have dedicated camera and video buttons — looking at the bottom right of the second image we can make out a button extruding so this might not be so far-fetched.

Both phones would of course offer the typical connectivity, i.e. Bluetooth 3.0 and Wi-Fi while NFC is a possibility. There is also a chance that they will be running an updated version of HTC’s UI skin, Sense 3.5.

[Image of Ruby courtesy of pocketnow]