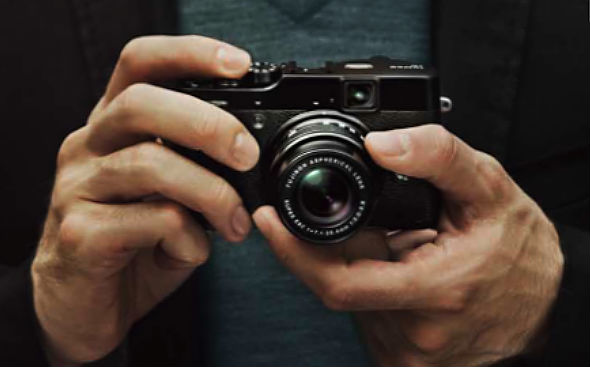 Fujifilm has just announced the FinePix X10 (previously rumored as the X50), a new retro looking point-and-shoot camera, which can confidently claim to be the younger brother to the X100. The X10 goes directly in the category of high performing compact zoom cameras, together with the Olympus XZ-1, Panasonic LX5, Nikon P7100 and Canon S95. The X10 will feature the largest sensor size for a point-and-shoot, 2/3-inch 12-megapixel EXR-CMOS sensor offering sensitivity up to ISO 12,800 — the other P&S’ above have sensor sizes of around 1/1.8-inch. Fuji has paired this with a 28-122mm (4x zoom) f/2-2.8 Fujinon lens featuring a newly developed optical stabilization mechanism.

The X10 will manage 7fps continuous shooting at full resolution, 1080p/30fps video, offer RAW and an electronic horizon leveling gauge. Similar to the X100 the X10 will feature a magnesium alloy body and get this, it will also feature an optical viewfinder. Fuji has donned it with a 2.8-inch 460k dot screen, 49-point contrast AF system and a 0.8 second power-up delay. The X10 will be able to shoot 360 panoramic photos and film simulation modes such as Velvia, Provia and Astia. The camera will measure 117.0x 69.6 x 56.8 mm (4.6 x 2.7 x 2.2 in) and weight approximately 350g (12.3 oz) (including battery and memory card).

We’re certainly by now used to Fujifilm pushing the envelope and redefining what we expect from small cameras in technical terms, we just have to wait until October or November when this camera is said to be released.