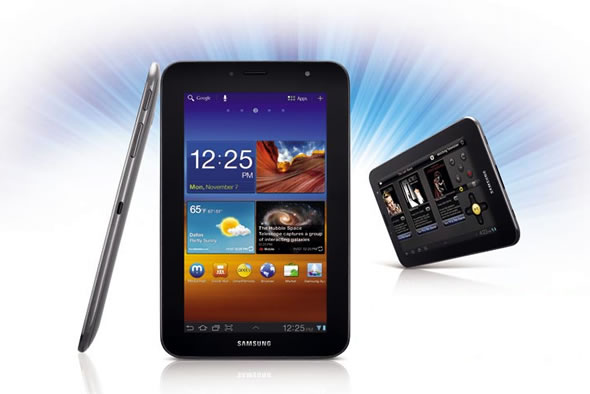 Android handheld devices with dual-core processors are a dime a dozen (or so to speak) nowadays. But not many run on Samsung’s Exynos system on a chip (SoC). There’s the Samsung Galaxy S II smartphone and well now there’s the Samsung Galaxy Tab 7.0 Plus tablet. So what’s so special about Exynos? Well, pitted against the competing dual-core Qualcomm Snapdragon S3, NVIDIA Tegra 2 and TI OMAP 4 SoCs, the Samsung Exynos comes out as king. It’s got both serious processing and graphics chopping jaws, as was clearly demonstrated by some serious benchmark performance from the SGS II.

The Galaxy Tab 7.0 Plus packs a dual-core 1.2GHz Exynos processor, a 7-inch 1024×600 resolution display (unfortunately it’s not AMOLED) with a 3-megapixel rear and 2-megapixel front cameras. The tablet runs Android 3.2 Honeycomb and was supposed to appear on U.S. retail channels on November 13th. Well Amazon US seems to have jumped the gun a bit and is already shipping the Galaxy Tab 7.0 Plus for the advertised price of $400. You are well warned now, if you were looking to grab yourself a skinny little performing tab.