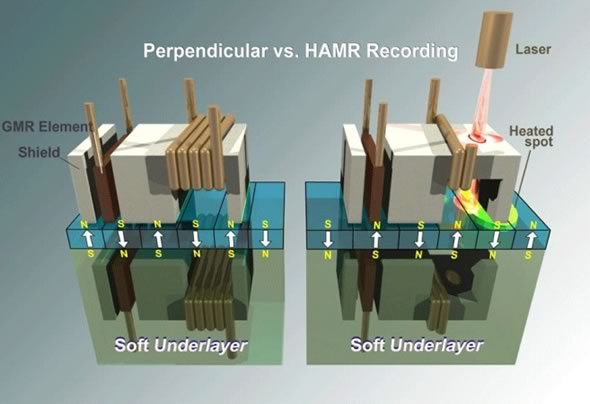 It’s hard to keep up with our insatiable appetite for more and more data storage and hard drive manufacturers really have their work cut out for them. To increase hard drive capacity, manufacturers have to fit information ever more densely, but you see physics has a thing to say about packing our bits too tight on magnetic media. The first technological ‘snag’ was overcome in 2005 when perpendicular magnetic recording (PMR) was commercialized taking the reigns from longitudinal magnetic recording (LMR).

PMR is able to offer three times the storage density over LMR technology. However, we’re now heading for the theoretical data density limit of around 1 trillion bits per square inch for PMR drives. But don’t despair, a new technology is on the horizon called heat-assisted magnetic recording (HAMR). The technology uses a laser to first heat the magnetic material before writing to it.

The current maximum capacity for a 3.5-inch hard drive is 3 terabytes (TB) for a 620 Gbit/sq. inch density.

Here’s is the full press release:

CUPERTINO, Calif. – March 19, 2012 – Seagate (NASDAQ:STX) has become the first hard drive maker to achieve the milestone storage density of 1 terabit (1 trillion bits) per square inch, producing a demonstration of the technology that promises to double the storage capacity of today’s hard drives upon its introduction later this decade and give rise to 3.5-inch hard drives with an extraordinary capacity of up to 60 terabytes over the 10 years that follow. The bits within a square inch of disk space, at the new milestone, far outnumber stars in the Milky Way, which astronomers put between 200 billion and 400 billion.

Seagate reached the landmark data density with heat-assisted magnetic recording (HAMR), the next- generation recording technology. The current hard drive technology, Perpendicular Magnetic Recording (PMR), is used to record the spectrum of digitized data – from music, photos, and video stored on home desktop and laptop PCs to business information housed in sprawling data centers – on the spinning platters inside every hard drive. PMR technology was introduced in 2006 to replace longitudinal recording, a method in place since the advent of hard drives for computer storage in 1956, and is expected to reach its capacity limit near 1 terabit per square inch in the next few years.

“The growth of social media, search engines, cloud computing, rich media and other data-hungry applications continues to stoke demand for ever greater storage capacity,” said Mark Re, senior vice president of Heads and Media Research and Development at Seagate. “Hard disk drive innovations like HAMR will be a key enabler of the development of even more data-intense applications in the future, extending the ways businesses and consumers worldwide use, manage and store digital content.”

Hard drive manufacturers increase areal density and capacity by shrinking a platter’s data bits to pack more within each square inch of disk space. They also tighten the data tracks, the concentric circles on the disk’s surface that anchor the bits. The key to areal density gains is to do both without disruptions to the bits’ magnetization, a phenomenon that can garble data. Using HAMR technology, Seagate has achieved a linear bit density of about 2 million bits per inch, once thought impossible, resulting in a data density of just over 1 trillion bits, or 1 terabit, per square inch – 55 percent higher than today’s areal density ceiling of 620 gigabits per square inch.

The 1 terabit per square inch demonstration extends a long line of storied technology firsts for Seagate, including:

Seagate achieved the 1 terabit per square inch breakthroughs in materials science and near-field optics at its heads and media research and development centers in Bloomington, Minnesota, and Fremont, California.