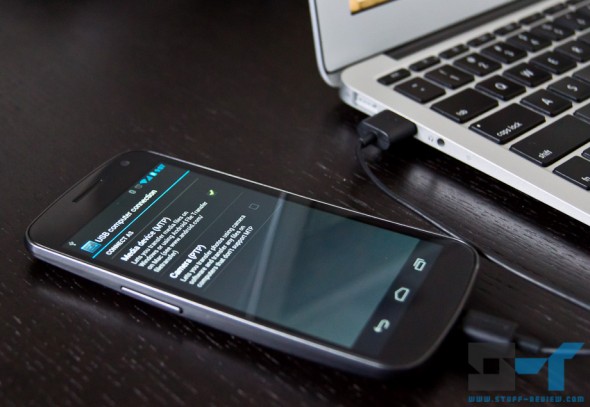 Connecting the Samsung Galaxy Nexus to your MacBook Pro, Air, iMac or any other Mac OS X computer isn’t as straightforward as other Android devices. Other Android devices offer access through a protocol named USB mass storage, which means your device is treated like a USB flash drive. The Galaxy Nexus uses the Media Transfer Protocol (MTP in short) in order to allow you to transfer media and other files between your computer. Windows PCs have built-in support for MTP but Mac OS computers don’t. If you want a more detailed account of MTP, USB mass storage and the Nexus, hit our article here.

To transfer files between the Galaxy Nexus and a Mac OS X system you must first download and a install the small official Android application named ‘Android File Transfer’. First go here and download the application dmg. Once the download has completed, doubleclick on androidfiletransfer.dmg. Now in the installer window click and drag the Android File Transfer icon to the Applications folder on its right (note you may be required to enter you system password at this point). Now the tool is installed on your Mac.
END_OF_DOCUMENT_TOKEN_TO_BE_REPLACED