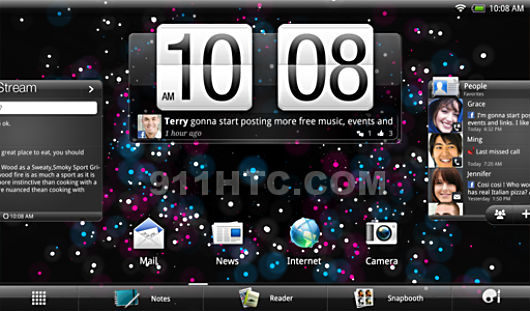 A Chinese blog, 911HTC, has uncovered evidence in a leaked ROM of a new HTC tablet codenamed HTC Puccini. If the leak is to be believed, then, this device will join HTC’s tablet line-up as the larger brother of the 7″ HTC Flyer, sporting a 10-inch form factor with a WXGA resolution (1280 x 800 pixels).

The tablet is said to be sporting quite some muscle with the new dual core Qualcomm MSM8660 Snapdragon processor running at 1.5Ghz while the Adreno 220 graphics processing unit should allow it to steam through high definition material.

The captured screen-shot shows a similar UI to the HTC Flyer’s Sense 3.0 and should be running atop Android Honeycomb (3.0.1); while the prominent position of the Notes app could mean it will also support a capacitive stylus (a.k.a. Magic Pen).