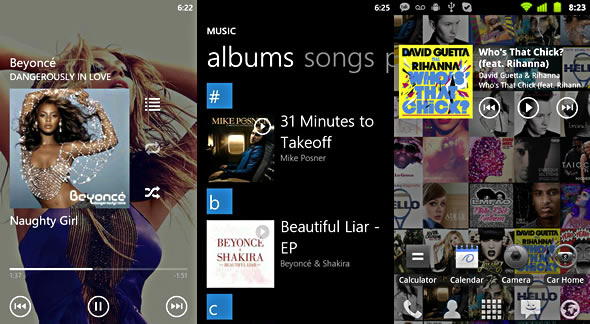 We first fell in love with this Android music app because of its uncanny resemblance to the Zune and Windows Phone 7 music players. The app has grown however to be much more than just a copycat of Microsoft’s Metro UI; UberMusic is fully customizable with a number of skins, which you can download from the Android Market. Sure enough however the Zune/WP7 look is still available as the downloadable Metro skin.

UberMusic offers six different widget sizes, automatically downloads artists’ photos and displays them in the now playing screen and has a cool live wallpaper that fills the screen with your album art.

Ubermusic is currently a paid app, $3.49, though an ad-supported free version could be in the works. All the skins are free and you might want to un-install the beta before downloading this one.