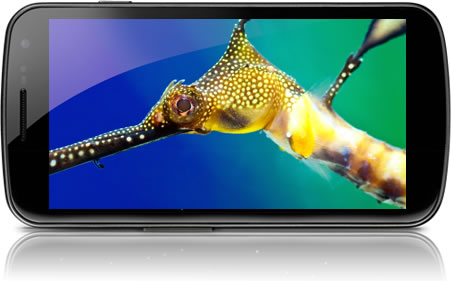 In standard RGB flat panel screens, each pixel is made of three subpixels, one for each color, Red, Green and Blue. Samsung’s PenTile screens have only two subpixels per pixel, and instead ‘borrow’ subpixels from neighboring pixels to ‘mix’ the right color. This leads to a blurring of sharp edges, while white blocks may get a tint at the edges. The higher pixel density a PenTile display has, the less profound these effects would be. 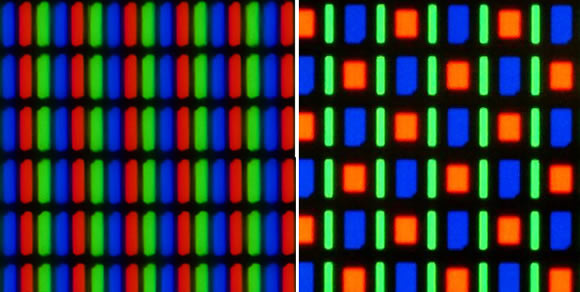 The original Nexus One, the Nexus S and the Samsung Galaxy S all featured PenTile AMOLED displays. You can see above the arrangement of subpixels in Samsung’s PenTile Matrix screen on the Nexus One on the right vs. a standard RGB arrangement on the left. Samsung moved away from PenTile with Super AMOLED Plus screens; which was a key improvement on the Galaxy S II smartphone against the Samsung Galaxy S.

Now, a few tech blogs are going overboard in damning the Galaxy Nexus for using a Super AMOLED HD (minus the Plus) screen with PenTile technology, however does it really matter that much? We would guess not, the Galaxy Nexus’ screen has a significantly higher pixel density than previous PenTile smartphones, so, as mentioned, the PenTile effect should be much less pronounced and perhaps not even perceivable to the naked eye. Undoubtedly a standard RGB ‘Super AMOLED Plus HD’ screen would look better, but these don’t exist yet. On the other hand, AMOLED screens in general have the wow effect, with really punchy colors, deep blacks and great viewing angles. The Galaxy Nexus screen in person does have that wow effect.

AnandTech has crunched a few numbers, and has come up with different subpixel densities for various smartphones, and, although the subpixel density of the Galaxy Nexus falls below that of the iPhone 4S, it’s slightly better than the excellent Galaxy S II. So what’s the moral here, if you are a display purist have a look at the Galaxy Nexus in person before grabbing one, otherwise, take the plunge with the confidence that you are getting a fabulous cutting edge device.