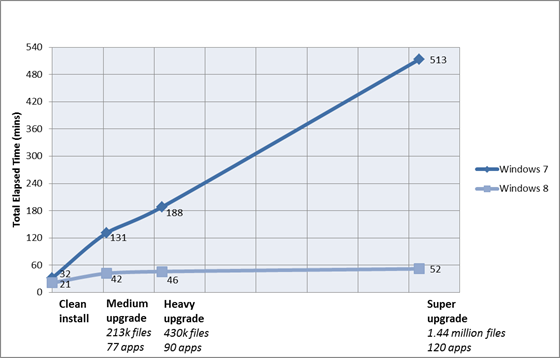 I still wake up at nights running cold sweat from nightmares of past Windows setup experiences. Installing Windows was an extremely time-consuming and painful experience, especially if you wanted to keep your files or settings instead of doing a fresh install. Although the process has been improving with each new version of Windows, with Windows 7 making the experience much easier, it’s still very time-consuming and you need to keep a tech-minded person handy for help.

Microsoft has been keeping us deeply involved in the Windows 8 development process through an official blog, and their latest post deals with improvements made in the setup and upgrade process. Microsoft promises that the new install process will be easier, faster and extremely stable.

Microsoft faces a huge challenge when it comes to managing the install and upgrade process for a new version of Windows. Windows is designed to run on personal computers with millions of different configurations. Users’ demands may also vary widely, someone might want to do a clean and customized install whereas another would just want to upgrade a previous Windows installation with the least user interaction.

First big change for WIndows 8, is that Microsoft has moved to a web focused delivery of the operating system. Although you will still be able to get a physical DVD with Windows on it, downloading the install file is now the preferred method. Best of all when you download online you get a ‘pre-keyed’ version, so that when installing you don’t need to enter the 25-digit product key at all.

Next, Microsoft has made the installation and upgrade procedure much simpler by requiring less user interaction and automating many of the upgrade processes, such as transferring of files, settings and applications. In Microsoft’s scenario, Windows 7 presented a specific user with four different wizards and 60 different screens, the same procedure in Windows 8 required as few as 11 clicks, 82% less. 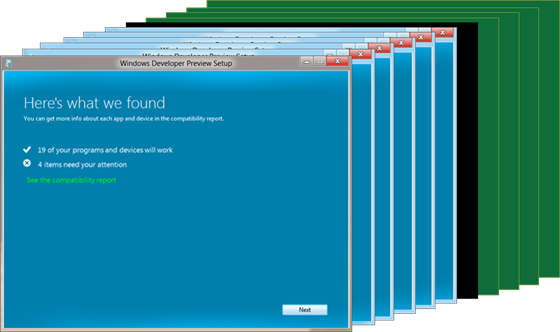 Finally, it all runs happens much, much faster compared to Windows 7, especially if you have a large number of files and applications that you want to keep when you upgrade to Windows 8. The graph at the top compares Windows 7 to Windows 8 upgrade times. Under the last scenario Windows 7 would have taken almost 9 hours to complete the process, whereas Windows 8 achieves the same task in less than one hour. We’re impressed.