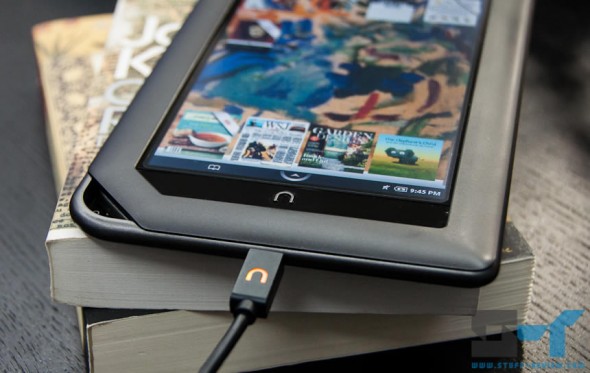 The saying goes that the enemy of my enemy is my friend, and it seems that Microsoft, from software giant fame, and Barnes & Noble, the operator of brick and mortar bookstores but also of the NOOK digital reading platform, are ready to put their past differences behind and get together in a joint venture.

Yeah the two companies had been entangled in a number of patent disputes, relating to B&N’s NOOK devices, and B&N has also been firing antitrust claims against Microsoft. Well the two past enemies have just announced today that they will forming a new company, with Microsoft taking up 17.6 percent for $300 million and B&N will be left with the remaining 82.4%.

The new company will receive B&N’s NOOK digital and College businesses and stay focused on digital publishing and reading, with B&N committed to releasing its NOOK software for Windows 8 — we’re guessing as a Metro app. There is specific mention of educational material and NOOK Study software, which we are sure is a direct answer to Apple’s push into textbooks and iTunes U.

The press release states: The formation of Newco and our relationship with Microsoft are important parts of our strategy to capitalize on the rapid growth of the NOOK business, and to solidify our position as a leader in the exploding market for digital content in the consumer and education segments.

The move is a direct response to Amazon’s and Apple’s growing domination in digital content.

The companies have also settled all patent litigation and B&N and the new company will be paying Microsoft licensing royalties for use of its patents in NOOK e-readers and tablets.

So there you have it, expect to see a lot more NOOK in Windows and Microsoft products — an even perhaps Windows-powered NOOK tablets sometime in the future — as the two companies will now be holding hands.

Here is the full press release:

New York, NY and Redmond, WA (April 30, 2012) – Barnes & Noble Inc. (NYSE: BKS) and Microsoft (NASDAQ: MSFT) today announced the formation of a strategic partnership in a new Barnes & Noble subsidiary, which will build upon the history of strong innovation in digital reading technologies from both companies. The partnership will accelerate the transition to e-reading, which is revolutionizing the way people consume, create, share and enjoy digital content.

The new subsidiary, referred to in this release as Newco, will bring together the digital and College businesses of Barnes & Noble. Microsoft will make a $300 million investment in Newco at a post-money valuation of $1.7 billion in exchange for an approximately 17.6% equity stake. Barnes & Noble will own approximately 82.4% of the new subsidiary, which will have an ongoing relationship with the company’s retail stores. Barnes & Noble has not yet decided on the name of Newco.

One of the first benefits for customers will be a NOOK application for Windows 8, which will extend the reach of Barnes & Noble’s digital bookstore by providing one of the world’s largest digital catalogues of e-Books, magazines and newspapers to hundreds of millions of Windows customers in the U.S. and internationally.

The inclusion of Barnes & Noble’s College business is an important component of Newco’s strategic vision. Through the newly formed Newco, Barnes & Noble’s industry leading NOOK Study software will provide students and educators the preeminent technology platform for the distribution and management of digital education materials in the market.

“The formation of Newco and our relationship with Microsoft are important parts of our strategy to capitalize on the rapid growth of the NOOK business, and to solidify our position as a leader in the exploding market for digital content in the consumer and education segments,” said William Lynch, CEO of Barnes & Noble. “Microsoft’s investment in Newco, and our exciting collaboration to bring world-class digital reading technologies and content to the Windows platform and its hundreds of millions of users, will allow us to significantly expand the business.”

“The shift to digital is putting the world’s libraries and newsstands in the palm of every person’s hand, and is the beginning of a journey that will impact how people read, interact with, and enjoy new forms of content,” said Andy Lees, President at Microsoft. “Our complementary assets will accelerate e-reading innovation across a broad range of Windows devices, enabling people to not just read stories, but to be part of them. We’re at the cusp of a revolution in reading.”

Barnes & Noble and Microsoft have settled their patent litigation, and moving forward, Barnes & Noble and Newco will have a royalty-bearing license under Microsoft’s patents for its NOOK eReader and Tablet products. This paves the way for both companies to collaborate and reach a broader set of customers.

Additional information will be contained in a Current Report on Form 8-K to be filed by Barnes & Noble.

Barnes & Noble and Microsoft will host an investor call and webcast beginning at 8:30 A.M. ET on Monday, April 30, 2012. To join the webcast, please visit: www.barnesandnobleinc.com/webcasts.