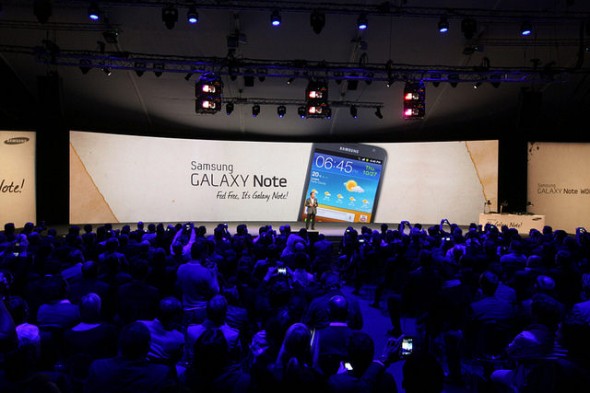 Samsung has had a lot of success shipping its Android devices en masse. The Samsung Galaxy S II has broken all kinds of sales records and we are pretty sure the Galaxy Nexus is flying off the shelves now too. An unlikely win for the company, however, is the 5.3-inch Galaxy Note which falls somewhere between the being a smartphone and tablet.

It seems that the mantra ‘bigger is better’ is working out for Samsung, which has shipped over one million Galaxy Notes since its release in late October. Sales have been going well and are on the rise in Europe and Asia. US consumers have been importing the Galaxy Note from other markets but the announcement mentions that the device will launch officially on the other side of the Atlantic in 2012. No mention yet if it bring support for LTE however.

As a reminder, the Galaxy Note runs Android 2.3 Gingerbread (but will soon be upgraded to Ice Cream Sandwich) on a dual-core 1.4GHz Samsung Exynos processor. The 5.3-inch Super AMOLED PenTile Matrix HD screen has a 1280×800 resolution and the phone comes together with a Wacom-designed pressure sensitive stylus, named S Pen. We love the fact that it’s sporting a relatively large 2,500mAh battery, so you can at least enjoy the big screen without much worry of running the battery down too fast. The Galaxy Note weighs 178g (6.3 oz) and measures 9.65mm (0.38 inches) thick.