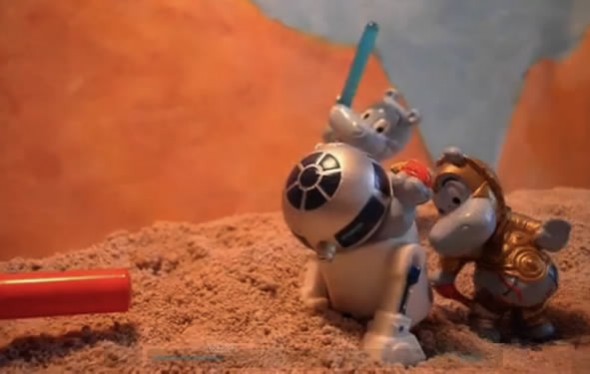 Ahhh, the internet, such a weird and wonderful place. Though some try to enslave this rare and free-roaming white unicorn, it continues to have a life of its own. Scrap that, it has multiple lives, with multiple personalities, most of which seem to be addicted to alcohol and prescription medication. Forgive my ranting, but it was inspired by watching too much of the internet’s latest creation…

And here comes the “Star Wars Uncut” project. It’s a crowd-sourcing project, which has split the entire Star Wars Episode IV: New Hope movie into 15 seconds chunks. Anyone can claim their own piece, re-record it and then submit the outcome back to the project. It has been going on since 2009 and fan response has been overwhelming.

The team behind the idea and the project has now taken all the individual 15 second fan-made chunks and pieced them together to make “Star Wars Uncut: Director’s Cut”, a full-length movie, that is as fun and hilarious as it is schizophrenic. You can watch the amazing outcome below.