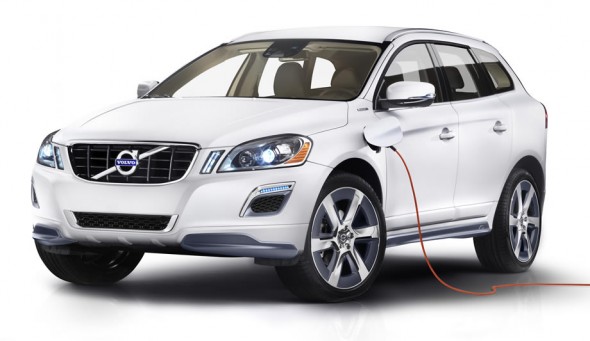 We like a touch of green here at Stuff-Review, and Volvo has just announced a new plug-in hybrid concept car, which it claims to be superior to all existing hybrids. The Volvo XC-60 concept car is both a plug-in electric vehicle, an economical hybrid and a high-performance car in one. The driver can switch between different driving modes using buttons on the instrument panel.

The driver can choose between three modes. The Pure mode, which mainly uses the car’s electric motor for zero emissions and a range of 35 miles. The Hybrid mode, which is the car’s standard setting, and combines both the gasoline engine and electric motor to provide maximum efficiency. Under European standards you get CO2 emissions of 53 g/km (2.3 l/100 km) and a fuel economy of over 100 mpg (50 mpg under the US standard, which includes emissions for electrical energy). Under the hybrid mode the car has a range of 600 miles (960 km). The final is Power mode, which combines the 280 horse power four cylinder turbocharged gasoline engine and the 70 hp electric motor to achieve 350 hp and acceleration of 0 to 60 mph in 5.8 seconds. 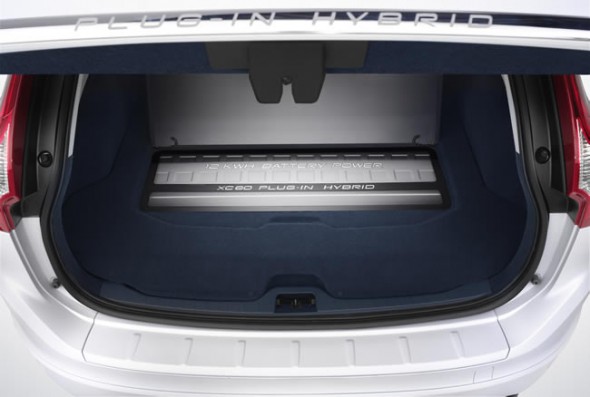 To charge the integrated rear mounted lithium-ion pack it would take approximately 3.5 hours from a 220V supply and 7.5 hours from 110V/12A. The XC60 plug-in hybrid also offers an interesting electric four-wheel drive mode at the touch of a button.

Anyone wanting to catch a peak at the environmentally friendly crossover SUV can do so at the 2012 North American International Auto Show in Detroit starting next week. The full and detailed press release is after the break and so is a video explaining the different operating modes of the car.

At the 2012 North American International Auto Show in Detroit, Volvo Car Corporation will unveil an innovative gasoline plug-in hybrid.
The Volvo XC60 Plug-in Hybrid Concept is an electric car, a highly economical hybrid and a powerful high-performance car all rolled into one.
At the touch of a button, the driver decides how the available power from the combination of the high-performance gasoline engine and the electric motor is to be utilized.

“The technology in the XC60 Plug-in Hybrid Concept is as ingenious as it is unique,” says Stefan Jacoby, President and CEO of Volvo Car Corporation. “You can make really green progress on the road without compromising on any of the luxury car’s renowned properties. No other manufacturer has succeeded in delivering fuel economy and electrical range on this level in a capable, spacious performance car with 350 horsepower on tap.”
“This world-class gasoline plug-in hybrid technology, featuring a state-of-the-art four-cylinder engine from our upcoming Volvo Environmental Architecture engine family, will reach our American showrooms in a couple of years. However, it is too early to say which model will be the first to feature this solution,” Stefan Jacoby says.

Pure Hybrid Power – three cars in one
The driver chooses the driving mode via three buttons on the instrument panel. The buttons give the car three distinct temperaments: Pure, Hybrid or Power.
In Pure mode the car is powered solely by its electric motor as much as possible. The operational range is up to 35 miles (charge depleting range, U.S certification driving cycle) with zero tailpipe emissions in urban traffic. The range according to the European certification driving cycle NEDC is 45 km.
Hybrid mode is the standard setting whenever the car is started. The gasoline engine and electric motor cooperate to provide maximum driving pleasure with minimum environmental impact. According to the European certification driving cycle NEDC, CO2 emissions are 53 g/km (2.3 l/100 km) – which translates into fuel economy of over 100 mpg. Using the U.S certification standards, which include emissions from the production of the electric energy, the combined fuel economy in continuous driving is 50 mpg. The car has a total operating range of up to 600 miles (960 km).
In Power mode, the technology is optimized to create maximum possible power. The gasoline engine with 280 hp and 380 Nm (280 lb.-ft.) is combined with the electric motor with 70 hp and 200 Nm (148 lb.-ft.). The electric motor’s instant torque delivery contributes to the car’s acceleration from 0 to 60 mph in 5.8 seconds (0-100 km/h in 6.1 seconds).
Four cylinders with the same power as a six-cylinder unit
The front wheels of the XC60 Plug-in Hybrid Concept are powered by a four-cylinder turbocharged gasoline engine from the forthcoming VEA (Volvo Environmental Architecture) engine family. This engine produces 280 horsepower and maximum torque of 380 Nm (280 lb.-ft.). Power delivery to the wheels comes via a newly developed eight-speed automatic transmission.
“In the XC60 Plug-in Hybrid Concept we demonstrate that our forthcoming four-cylinder engines offer the same high performance as today’s sixes. At the same time, their fuel consumption will be lower than in current four-cylinder engines,” says Peter Mertens, Senior Vice President Research & Development at Volvo Car Corporation.
The concept car carries a “T8” badge, which emphasizes the combined 350 horsepower of the high-performance four-cylinder engine and the electric motor. This moves the car into territory previously occupied solely by eight-cylinder engines.
“It’s time to stop counting cylinders,” Peter Mertens says. “Four-cylinder engines are the most effective way to quickly reduce CO2 emissions and fuel consumption without compromising customer expectations when it comes to driving pleasure and performance.”

Reduction of parts, weight and fuel consumption
VEA is a modular range of diesel and gasoline engines. The gasoline versions come with direct injection, minimized internal losses and balance shafts for maximized comfort.
Several levels of turbocharging open up for flexibility that encompasses the whole range from high power and torque variants to extremely fuel-efficient derivatives. In order to cover all customer requirements, certain engines will gain added performance via hybrid drive or other spearhead technology.
The modular format is based on a standard of 500cc (30 cubic inches) per cylinder for optimum thermodynamics. It could also be used to develop three-cylinder engines. VEA offers several advantages
The number of unique parts is reduced. This promotes manufacturing efficiency, quality assurance and efficiency of new development projects.
The new powertrains are considerably lighter than present engines with similar performance.
Fuel economy is improved by up to 35 percent compared to engines with similar performance.
Modularity and compact transverse design are also ideal for future electrification developments.
Integrated Starter Generator
The engine in the XC60 Plug-in Hybrid Concept has no conventional starter motor or alternator. Instead, there is an Integrated Starter motor and Generator (ISG) connected to the crankshaft, which is located between the engine and the transmission. The ISG is capable of delivering an extra 34 kW (45 hp) during acceleration. It also charges the battery during braking.

Charge the battery at home
The rear axle of the XC60 Plug-in Hybrid Concept is driven by an electric motor producing 70 horsepower. It is supplied with power from a 12 kWh lithium-ion battery pack installed under the floor of the load compartment.
The battery pack is recharged from a regular power outlet, at home or at a parking place. Recharging time varies with the current. If 220V is available a full charge with 12A takes just 3.5 hours. With 110V/12A a full charge takes 7.5 hours.
It is also possible while recharging the car to heat or cool the passenger compartment in order to make the start of the journey more comfortable. This also means that more battery power is available to propel the car.

Constantly online
The Volvo Sensus infotainment system in the XC60 Plug-in Hybrid Concept keeps the driver constantly updated on everything that makes the journey simpler, more efficient and more entertaining. A few examples of available information:
Best route to the destination depending on whether the driver prioritizes low energy consumption, the fastest route or the shortest distance.
Low Emission Zones where sufficient capacity is needed for running on pure electricity.
Charging stations with access to renewable electricity.
Locations along the route with access to quick-charging facilities.
Mobile application
The driver also can connect to the car via a mobile phone application. This offers convenient access to a wide range of data, such as the battery’s charge level, remaining range, and the location and capacity of the nearest recharging station. Via the app, it is possible to verify if the charger cable is hooked up and it is also possible to pre-program the car’s interior climate.
“Creating an intuitive driver’s environment that always gives you access to updated, useful information is an important part of our product development. This includes that you should be as updated when the car is parked as when you’re behind the wheel,” says Stefan Jacoby.

Muscular appearance
The Volvo XC60 Plug-in Hybrid Concept is painted in a special white color and the 21-inch wheels enhance the muscular appearance. The interior features unique detailing and colors, such as sober dark-blue leather upholstery and inlays of blue-grey wood.
The instruments have been tailored to give the driver all the necessary information about petrol and electricity consumption, battery charge level, remaining range and so on.