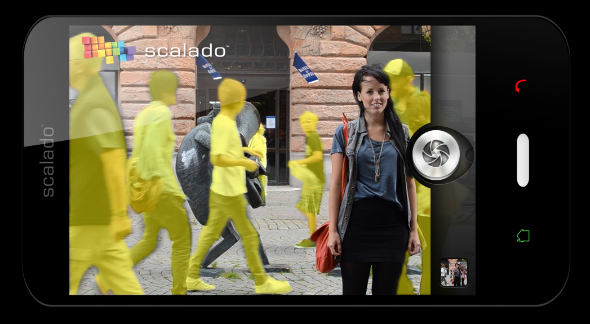 We’ve all more or less faced the same issue. You’re trying to take the picture of a loved one or a postcard worthy photo of a beautiful monument, yet all these other moving ‘objects’ keep coming into your frame. Well you could take a number of photos and then use a PC photo editing application, like Photoshop, to get rid of unwanted people in the photo but that’s hardly very convenient. The solution comes from Scalado, a mobile device imaging specialist. The company has just announced a new software technology called Remove that allows you to remove unwanted objects from images on the fly.

First, you take a shot with your mobile device’s camera, then you select unwanted objects from the captured image by using your device’s touchscreen. The software takes a number of additional shots and using some clever imaging technology, stitches them up on the fly to produce a cleaned-up result. Of course Remove only works with moving objects, i.e. people or other members of the animal kingdom.

The company will be showing its wares at MWC in Barcelona at the end of this month. Don’t expect however to be able to download an app directly from the company, Scalado works with device manufacturers and other technology companies, such as HTC, Motorola, Nokia and Qualcomm. What you can expect however is for the disappearing technology to magically appear on future devices.

Scalado excitedly introduce the world’s first object removal innovation in a mobile device
“Remove” automatically deletes unwanted details in captured imaging
Scalado, a world-leading provider of high-performance imaging technologies, applications and services for the mobile industry, have today announced the release of a new revolutionizing product named Remove. Remove is a technology that automatically highlights and removes any unwanted object from a captured photo. It is the world’s first Object removal software to be released on a mobile device.

Remove solves common photographic problems with unwanted objects in captured images, such as people getting in the way of our camera shot. Remove detects and selects the unwanted objects which simply can be removed automatically or by touching the selections on the screen or after capturing the image.

“After Zero Shutter Lag, Burst, and Rewind Scalado continue leading and changing the capturing landscape by bringing in new unique and needed capturing innovations”, says Fadi Abbas, CMO/VP BizDev and Co-founder of Scalado, -“What differentiate us is the combination of customers who believe in our superiority, leading industry partners and continuous innovations”

Last year Scalado released several innovations, e.g. the Rewind technology which allows the users to capture perfect group shots by automatically selecting the best shots in a burst and merging them into one perfect image. Rewind is already shipping in millions of mobile phones.

“Our team has been working hard to maintain its leading innovation position in the camera capturing field”, says Sami Niemi, CTO and Co-founder of Scalado, -“Remove shows that our technologies are setting the guidelines for the whole market”.

Scalado will premiere showcase Remove, the first of many new innovations planned this year, at the 2012 Mobile World Conference in Barcelona, February 27th to March 1st.