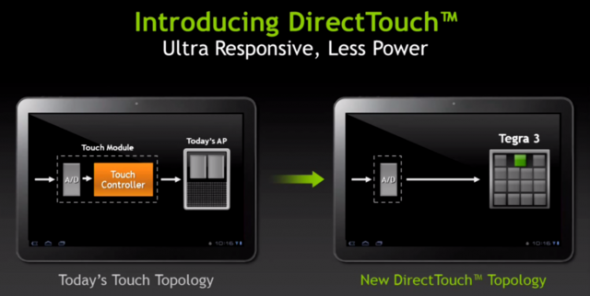 One of the criticisms against Android over Apple’s iOS, is that it doesn’t offer the same level of multitouch responsiveness and UI smoothness. This perceived ‘lagginess’ has been the subject of much debate, but we won’t go into that right now.

Well NVIDIA has been pimping its newest 4-PLUS-1 quad-core (plus fifth power-saving core) Tegra 3 system-on-a-chip (SoC) and created a new mobile touch technology, named DirectTouch, promising to improve multitouch experience. The DirectTouch architecture offloads part of the touch panel processing to the Tegra 3 CPU cores, reducing lag and increasing touch samples per second. This should improve user interface responsiveness and accuracy and of course gaming experience, without any expense on battery life.
END_OF_DOCUMENT_TOKEN_TO_BE_REPLACED 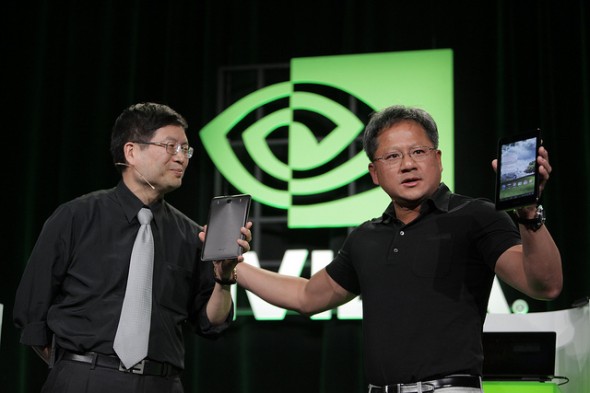 There are a lot of new tablets at CES this year. The biggest piece of news however has just come in today. NVIDIA has announced that a 7-inch version of the Asus Transformer Prime, which will also run on the Tegra 3 quad-core SoC and Android 4.0 Ice Cream Sandwich, is coming soon. The Asus ME370T tablet will sell for $249 at launch.

This completely blows the under-powered and barebones $199 Kinde Fire and $249 Nook Tablet out the water. Besides the super fast Tegra 3 chip, the 7-inch Asus tablet will have a 1280 x 800 screen resolution and an 8-megapixel camera.
END_OF_DOCUMENT_TOKEN_TO_BE_REPLACED

Nevertheless, there has been a backlash from the developer community, as Transformer Prime owners discovered that the tablet’s bootloader is locked. ASUS explains that having a locked bootloader is a Google DRM (Digital Rights Management) requirement in order to allow users to rent videos. ASUS intends to provide an unlock utility. Use of the tool will void your warranty and make Google Video unavailable.
END_OF_DOCUMENT_TOKEN_TO_BE_REPLACED

The world’s most popular hedgehog will be joined by his sidekick for the second installment in the Sonic 4 series. Sega has just announced that Sonic the Hedgehog 4 Episode II will be making its 2D return in 2012. The new side-scrolling adventure will see Sonic joined by Tails in what we’ve been hearing will be a much richer production.

Episode I had received a lukewarm response so Sega is now pulling out all the stops. Episode II has a completely reworked physics and graphics engines. The game will be released on a number of console and mobile platforms: Xbox Live Arcade, PlayStation Network, iOS App Store, Android Market and Windows Phone 7.

What’s more interesting is that for Android, Sega has been working closely with Nvidia, and a Tegra 3 enhanced version will be hitting the Android Market and featured on the Tegra Zone app. Let’s see how the new video game will be taking full advantage of the quad-core Tegra 3 chip. Announcement trailer video after the brake.
END_OF_DOCUMENT_TOKEN_TO_BE_REPLACED

We would easily guess that pairing such a chip with the latest and greatest version of Android would result in some smooth performance and now we’ve got the evidence to prove it. Nvidia has published a video of Android Ice Cream Sandwich running super smoothly on the Transformer Prime. If you would enjoy watching cool transitions, smooth 1080p playback and a demo of a quad-core optimized game called Riptide GP, head on after the break.
END_OF_DOCUMENT_TOKEN_TO_BE_REPLACED

Nvidia is claiming that the new Tegra 3 chip will offer up to five times the performance of the Tegra 2 with its 1.3GHz quad-core Cortex A9 processor and three times the graphics performance with a new 12-core graphics unit. What’s more interesting is that Nvidia has included a fifth, low-power 0 to 500MHz “companion core”. When you don’t need the power afforded by the quad-core unit, the companion core takes over, taking care of light-weight tasks, like listening to music, or during standby. The chip is also intelligent enough to scale the main 4 cores between single, dual and quad-core modes on demand as well.
END_OF_DOCUMENT_TOKEN_TO_BE_REPLACED 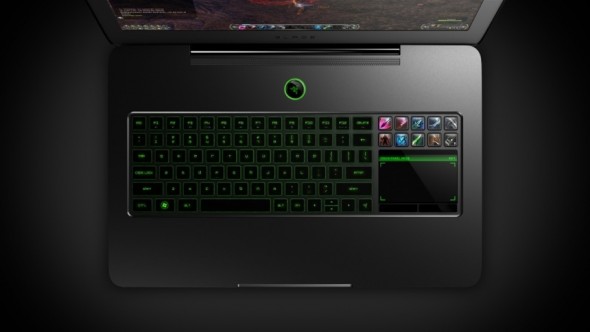 Or is it the color of envy? The envy your buddies will be feeling when you bring this laptop to your next LAN party. But we’d better take it from the top, Razer is best known for its performance computer peripherals such as gaming mice and keyboards. In fact Razer peripherals are good for any type of use and I happily own a Razer Mamba desktop mouse and an Orochi portable bluetooth mouse. Razer is also known for excessive use of neon-colored LEDs, but I guess that’s the conception of what gamers want.
END_OF_DOCUMENT_TOKEN_TO_BE_REPLACED