Nothing more in terms of information. Though we can reiterated the standing rumors for the Galaxy S III, which include a large screened device with the first non-PenTile Super AMOLED Plus HD 720×1280 screen, a quad-core Samsung Exynos 4412 processor or the dual-core 2GHz Exynos 5250, just 7mm of thickness and some space-age material.
END_OF_DOCUMENT_TOKEN_TO_BE_REPLACED 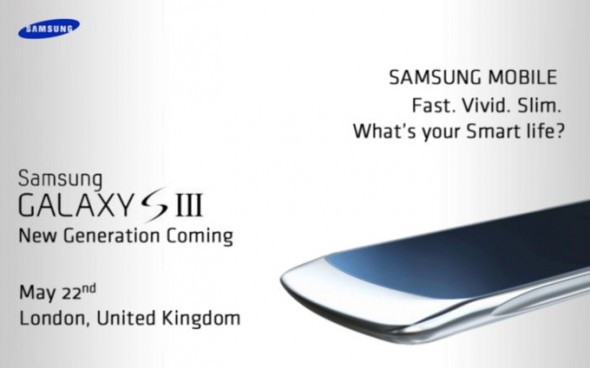 The device looks like a curvy slab of metal with a large display and practically zero left and right bezel — the zero bezel for the Galaxy S III has been one of the longest standing rumors and something we would be very happy about. There are also no hardware buttons, similar to the Galaxy Nexus (check out our full review here), and a feature of handsets designed with Android Ice Cream Sandwich in mind. The device certainly looks premium enough to merit its place in the incredibly successful Galaxy S series.
END_OF_DOCUMENT_TOKEN_TO_BE_REPLACED