What you see above are the innards — that is the motherboard — of the latest 2011 MacBook Air, dissected and displayed with love and care from the folks at iFixit.

A careful examination of the Thunderbolt controller chip at the top right has revealed that this is a different chip compared to the one used in other Thunderbolt-equipped Macs we’ve seen so far. This chip, codenamed Eagle Ridge, is capable of handling two bi-directional 10Gbps Thunderbolt channels and one DisplayPort output. This means you can connect only one display, that is, no daisy-chaining of displays here. 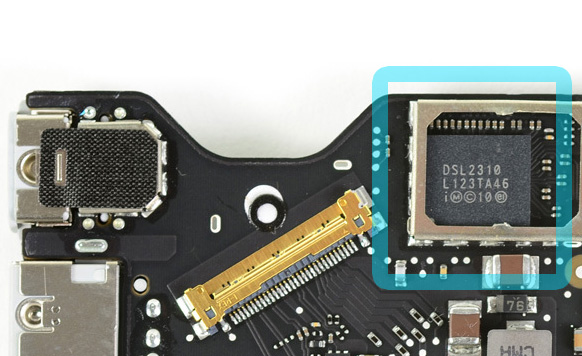 In contrast the bigger brother, Light Ridge, used in the 2011 iMac, MacBook Pros and Minis feature four channels and two DisplayPort outputs. Light Ridge seems to be reserved however for those computers with a discrete graphics card that would be capable of running two displays at once.

The new MacBook Air features Intel’s HD Graphics 3000 integrated processor rather than the previous NVIDIA GeForce 320M GPU which means it be hard pressed to run those two displays anyway.

So what does this all mean to the average MacBook Air user: not much. The MBA is targeted for ultra-portability rather than raw power and we would imagine that there is limited appetite for connecting it to two monitors at once. At the same time, the Eagle Ridge controller is still quite powerful, moving 40Gbps and handling a torrent of data.

All photos are courtesy of iFixit.