Compact camera lovers are having their best year yet. Panasonic has just announced a new series of high-end lenses, Lumix X, utilizing a Micro Four Thirds mount, which will lie between the current standard Lumix G and the premium Leica lenses. The big news however is that the first two X-lenses feature an electric-powered zoom — the world’s first digital interchangeable power zoom lenses; you zoom-in/out using a rocker level rather than rotating a mechanical barrel. Utilizing a power zoom, Panasonic has managed to shrink the lenses and cut down on their weight.

Panasonic is the first to have addressed the issue that although mirrorless interchangeable camera bodies have shrunk, their compactness is destroyed by large zoom lenses. The new lens features Power O.I.S. (optical image stabilization) suppressing large, slow movements more effectively than Mega O.I.S. and Panasonic also claims the new collapsible zoom will offer better overall performance than the standard lens. The lens will be sold individually for around $400, and will also be sold as a kit with the GF3 for $750 . Panasonic has announced new firmware for the DMC-G3, DMC-GF3, DMC-GF2 digital cameras to allow compatibility with the new lenses, though no word on older models such as the GF1. 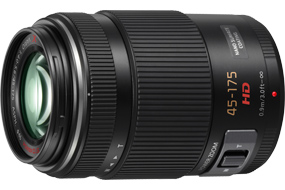