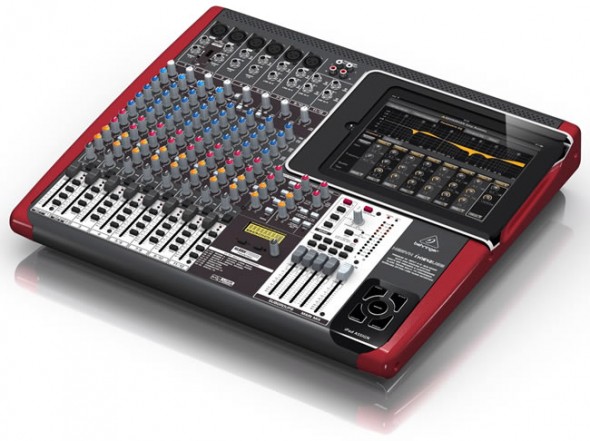 Behringer is a big name when it comes to audio and particularly mixers. The German company has announced three new small format mixers that can use the iPad as their brains. The XENYX series iX1642USB, iX2442USB, and iX3242USB mixers can also draw music from the iPad and record to it. You can also connect the mixers directly to a Mac or Windows computer via USB to record audio digitally.

The three mixers only vary in the number of input channels, 16, 24 and 32. All feature 32 editable presets, such as reverb, chorus, flange, delay and pitch shifter. Using the iPad to control the mixers’ FX Processor gives the user a full spectrum analyser and deep control of the EQ — of course turning virtual knobs can never beat the satisfaction of real ones. The mixers feature 130 dB dynamic range mic preamps and using the iPad’s video out capability, you can also sync performances to video.

The new Behringer mixers are only a drop in the ocean of new music products featuring some form of iPad integration being showcased at the National Association of Music Merchants (NAMM) Show, happening now in Anaheim, California.

January 18, 2012 Bothell, WA – Just in time for the 2012 NAMM Show, BEHRINGER unveils three small format premium mixers that directly interface with the ever-popular iPad. Drawing on the power of the most ubiquitous mobile digital device, the XENYX iX Series mixers are designed to handle live performance and provide state-of-the-art tools to create professional recordings. Users can also sync performances to video by utilizing the iPad‘s video out capability.

The new XENYX iX Series, which include the XENYX iX3242USB, iX2442USB and iX1642USB, feature a built-in iPad docking station designed to send signal to and from the iPad with a wide range of routing options.

The innovative feature set included in the new XENYX iX Series USB mixers makes it possible to record and mix on a professional level thanks to the built-in, stereo USB audio interface. Connect these mixers directly to a PC or Mac computer via a single USB cable to record any signal source connected to the mixer.

All iX mixers include the new dual-engine KLARK-TEKNIK FX processor with 32 editable, studio-grade presets such as reverb, chorus, flange, delay, pitch shifter and multi-effects. In addition to literally thousands of apps, the iX mixers use the iPad to control the new KLARK-TEKNIK FX Processor App, enhancing the mix by allowing the user deep control of EQ’s, compressors and reverbs and a full spectrum analyzer.

XENYX mixers’ 3-band channel EQ is based on the same circuitry used in British consoles that allows users to create signals with incredible warmth and detailed musical character. Additionally, “one-knob” compression is available on all mono channels. Dial in the perfect amount of compression for instruments and vocals, creating powerful mixes with punch and clarity.