You can get the Yoobao for around $30 in the US, £27-29 in the UK and 35-37 euros in the continent, just be sure to get the correct version for you iPad, i.e. look for the iPad 3 case for the new iPad. Bear in mind generally when you’re shopping for a new case to specifically look for one made for the new iPad as it is slightly thicker than the iPad 2. 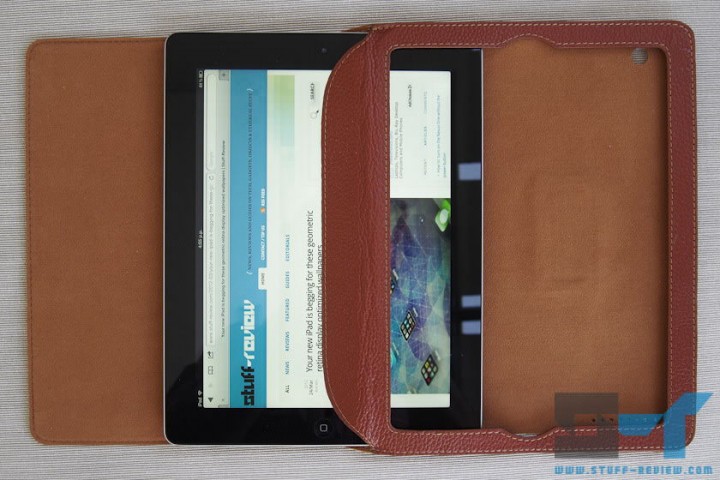 Marrying your iPad 3 with the Yoobao case is as easy as lifting the small leather tab, sliding the iPad inside, and then pushing the tab behind the iPad to secure it.

The fit is excellent with all ports and buttons accessible. Since this is a relatively thick leather case, it does make the buttons slightly recessed but you can still use them just fine. There are several small holes for the rear speaker, and although I was initially worried that this might affect audio quality it’s not the case. 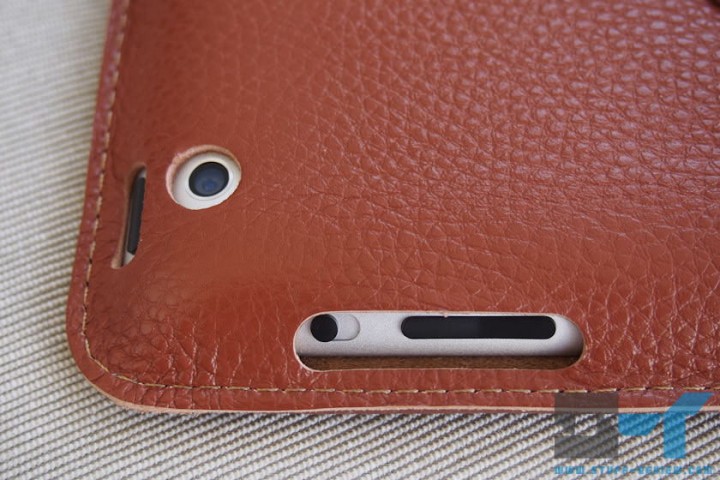 The only small issue I have is with the headphones port. If your 3.5mm jack is large you may have to pull the edge of the case out of the way to insert it. 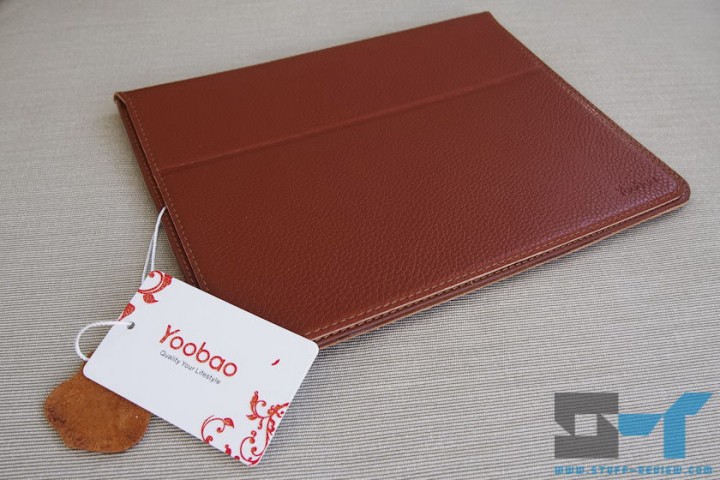 Now as we’ve said early on this is a $30 leather case, so you’ll have to set your expectations right. Saying that however, I think that it offers amazing value for money. It’s not premium leather but it’s still made of real leather. It does have a strong ‘leather’ smell at first but that goes away pretty quickly. 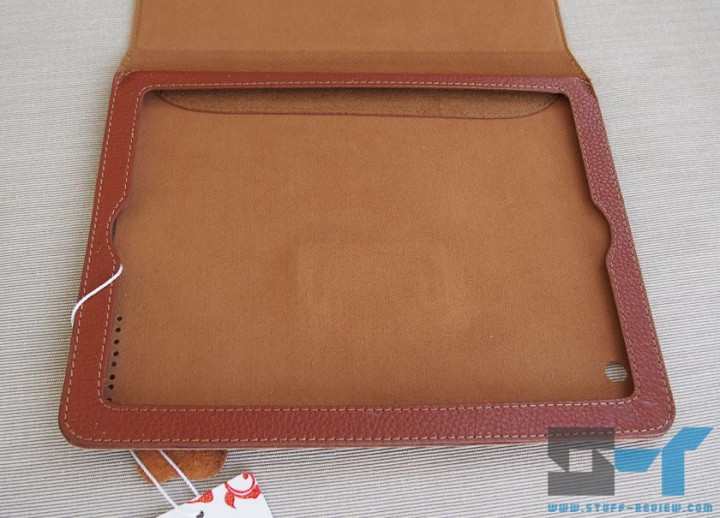 The outside is textured colored leather while the inside is soft suede-like lining. Yoobao makes them in black, brown, coffee, orange, purple, red, rose and yellow. Both materials are bound together by matching visible stitching.

I can’t attest how well the case or its color will hold up to the test of time, but after about a month there are no visible blemishes on my test unit. My only complaint in terms of build is that inside the front folding tab they’ve used flexible cardboard. Even Apple’s super-thin Smart Cover is more solid against bending.

As with all cases you’re trading some of the thinness of the device, but I don’t find the Yoobao case overly thick or heavy, though it might be for some. The 3rd generation iPad with the case weighs 1.88lbs (853g).

The front flap features hidden magnets, and similar to Apple’s Smart Cover it supports the auto wake-up and sleep function. That is when you open the case the iPad wakes up and then goes to sleep when you close it, without having to press a button.

Now for positioning, you can either completely fold the flap back or secure it inside a second small flap on the back. You can then either use it lying horizontally or vertically at fixed angles, pretty much in the same way as the Smart Cover. In this regard the Yoobao is more limited to other iPad cases that offer more customization in terms of positioning.

Below you can see a comparison, from the same viewing angle between the Yoobao and the Smart Cover. The Yoobao makes is easier to use the iPad at this angle. It’s also pretty sturdy in this position so you can easily type away. It’s also more comfortable to use with the iPad on your lap. 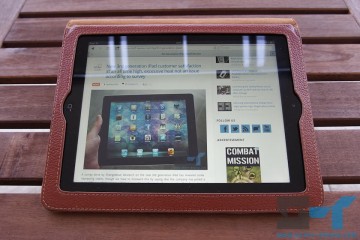 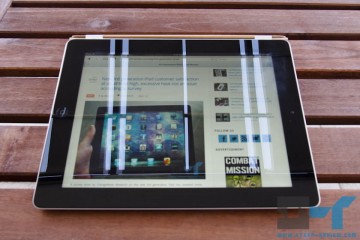 I also find the vertical angle to be better as well, but similar to the Smart Cover it doesn’t offer much security. Even a moderate touch can make the iPad topple over so typing in this orientation is a no-no. It does offer a nice angle to view videos though. As I’ve said above there are other cases that offer a lot more customization with your viewing angles, so you’ll need to think if that’s a major requirement for you. 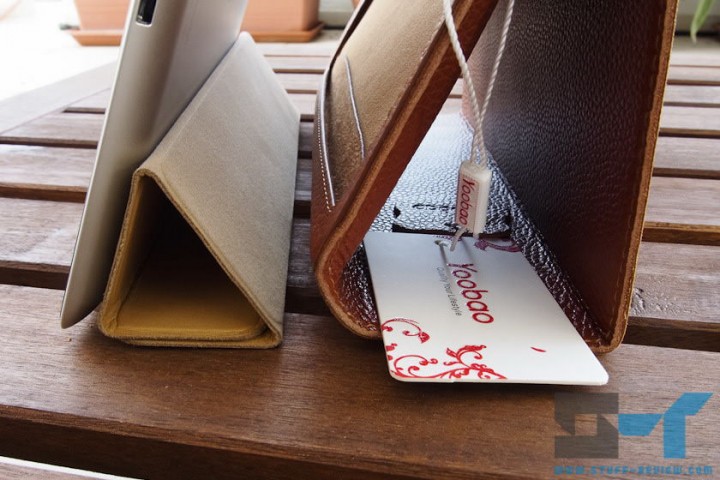 Because the case is quite thick and covers the entire iPad, it does offer some level of protection. Also because of the stitching that runs along the periphery you have the all-important protection around the edges of the iPad. I would imagine that the iPad would survive a small fall unscathed inside this case.

The camera also gets recessed behind the leather and thus protected from scratches.

I generally feel confident that the iPad is safe inside the Yoobao.

The sum of things 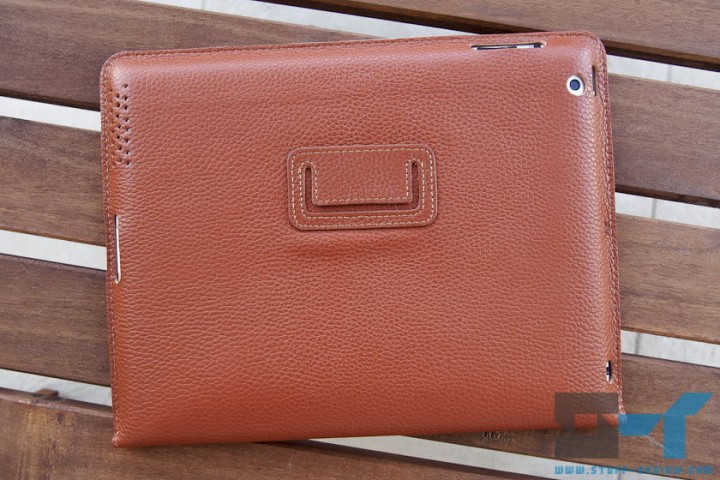 It all boils down to excellent value for money. With the Yoobao selling for around $30, less than the polyurethane Apple Smart Cover and much less than competing leather covers, it’s not a purchase you will easily regret.

As with all cases you will be trading some of the iPad’s svelteness and looks, but you will be protecting your device all around. It also offers better horizontal and vertical viewing angles than the Smart Cover, but doesn’t offer the degree of customization other cases do.