Specifically, I’ve had the occasional random restart, the Wi-Fi hotspot won’t work with my MacBook under MacOS X and while in a call, after pressing the speaker button the other person can’t hear me. You could also consider the screen’s yellow tint as something of an annoyance. I’ve experience a couple of occasional minor issues, like hangs on 3G data connectivity and a confused volume rocker tht would change media instead of the ringtone volume. 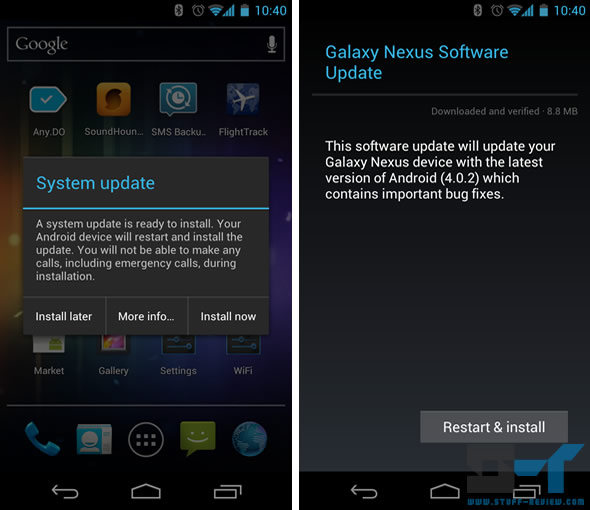 Obviously, 48 hours isn’t enough time to get to any conclussions, but the Wi-Fi hotspot to MacOS and speakerphone muting microphone while on call issues remain. The screen of course retains its lovely warmer white balance point. I haven’t had any restarts yet. The only noticeable improvement is better response on data transfers, i.e. any data requests like accessing a website don’t hang but get through faster. I also haven’t had the volume rocker button issue again yet.

Other users are reporting slightly better battery life, but I can’t opine on that based on two days’ use. Others are also reporting that the device is laggy under 4.0.2, but I haven’t experienced any lag. So what have you been seeing with your device?

As an indication, the Verizon changelog for 4.0.2 on the Galaxy Nexus LTE is the following: