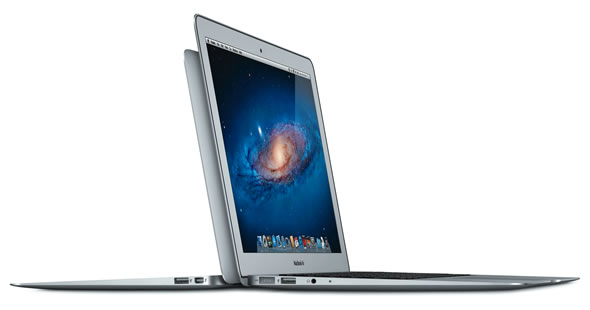 Although we can’t say we’re too surprised, together with the release of Mac OS X Lion, Apple has released an updated line of MacBook Air ultraportable laptops.

Both the 11- and 13-inch models have been updated with latest generation 2011 Intel Core i5 and i7 Sandy Bridge processors, Thunderbolt ports, while the MacBook Airs will once again sport back-lit keyboards.

Apple has also officially axed the basic white MacBook, which, lets face it, would have now had limited appeal as both MacBook Airs will now be running on speedy processors.

The 11-inch model weighs 2.38 pounds with a disclosed 5 hours battery life, while the 13-inch weighs 2.96 pounds providing up to 7 hours of battery life.

All models come with OS X Lion, of course, and you can order them online immediately — at least for now shipping is within 24 hours, so hurry up! Pictures and press release after the break.

Apple Updates MacBook Air With Next Generation Processors, Thunderbolt I/O & Backlit Keyboard
CUPERTINO, California—July 20, 2011—Apple® today updated the MacBook Air® with next generation processors, high-speed Thunderbolt I/O technology, a backlit keyboard and Mac OS® X Lion, the world’s most advanced operating system. With up to twice the performance of the previous generation, flash storage for instant-on responsiveness and a compact design so portable you can take it everywhere,* the MacBook Air starts at $999 (US) and is available for order today and in stores tomorrow.

With the latest Intel Core i5 and Core i7 dual-core processors, the new MacBook Air is up to twice as fast as the previous generation and has all the power you need for editing photos and movies, making FaceTime® calls, playing games, and working with documents and presentations. MacBook Air also features Intel HD Graphics 3000 and offers up to 4GB of faster 1333 MHz memory.

Thunderbolt I/O technology provides expansion possibilities never before available to MacBook Air users. Through a single cable, users can connect to high performance peripherals and the new Apple Thunderbolt Display, the ultimate docking station for your Mac® notebook. Thunderbolt can easily be adapted to support legacy connections such as FireWire® and Gigabit Ethernet.

MacBook Air comes with a full size backlit keyboard and an innovative glass Multi-Touch™ trackpad. Designed for comfort and ease of typing, the backlit keyboard uses a sensor to automatically detect a change in ambient lighting and adjusts the keyboard brightness for any environment. The Multi-Touch trackpad supports Lion’s new Multi-Touch gestures such as momentum scrolling, tapping or pinching your fingers to zoom in on a web page or image, and swiping left or right to turn a page or switch between full screen apps.

MacBook Air also features a brilliant, high resolution LED backlit display that is amazingly thin yet has the resolution of a much larger, bulkier screen. With ultra-fast Wi-Fi, you can wirelessly download apps from the Mac App Store™, get music and movies from iTunes®, back up data to Time Capsule® and quickly and easily share files using AirDrop. MacBook Air includes Bluetooth for wireless peripherals and two USB ports for easy connectivity for the wired and wireless devices you use every day.

Apple makes the industry’s greenest notebook lineup and the new MacBook Air meets Energy Star 5.2 requirements and achieves EPEAT Gold status.*** Each unibody enclosure is made of highly recyclable aluminum and comes standard with energy efficient LED-backlit displays that are mercury-free and made with arsenic-free glass. Mac notebooks contain no brominated flame retardants, are PVC-free and are constructed of recyclable materials.

Every new MacBook Air comes with Mac OS X Lion, the eighth major release of the world’s most advanced operating system, and iLife apps for creating and sharing great photos, movies and music. Lion introduces more than 250 new features to the Mac, including Multi-Touch gestures; system-wide support for full screen apps; Mission Control, an innovative view of everything running on your Mac; the Mac App Store, the best place to find and explore great software, built right into the OS; Launchpad, a new home for all your apps; and a completely redesigned Mail app.