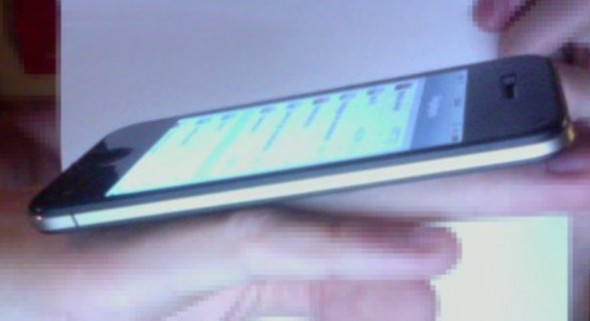 Time really does fly; why, it seems like yesterday that everyone was raving and speculating about the iPhone 4. Well, it’s actually been over a year now since the iPhone 4 was introduced, and of course speculation for the next Apple smartphone is running feverishly high. Apple has already unveiled iOS 5 and the rumor mill on the iPhone 5 that will join the operating system keeps churning.

It’s not hard to imagine that the iPhone 5 will be thinner, we’re used to Apple making things thinner, and well, with the success of bigger screened phones, it would seem logical that iPhone 5’s display will venture north of the usual 3.5-inches. So today’s leak comes from guigsh on MacRumors forum, who claims to have taken a picture of the iPhone 5 at the office of a French operator yesterday. It certainly matches the dimensions we’ve seen before, but so does an iPhone 4 with a little stretching and squishing in Photoshop. So what do you think?