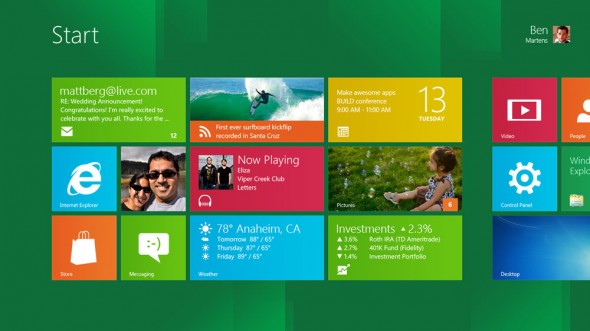 Microsoft just showed-off the next big version of Windows, to a room packed full of developers, at the BUILD conference. Windows 8 features two interfaces, one resembling the current Windows interface and a more touch friendly Metro-style interface — which you can see in the screenshot above. This allows Windows 8 to feel at home on normal desktops, touchscreen all-in-ones, tablets, laptops, you name it.

However Windows 8 is not just a change of appearances, the new operating system features a lot of improvements, we’ve already seen how Windows 8 will speed-up your boot times, and new features compared to Windows 7. We’ve compiled below a list of features which we think are interesting, from today’s official preview.

Microsoft is letting anyone download and play around with the Windows 8 Developer Preview starting from today 8pm Pacific Time. Just head over to dev.windows.com where you can download a 32- or 64-bit ISO file, unfortunately no ARM version yet. Note, as mentioned, this is a developer preview, not a beta, so many features may be missing and stability will be poor.