We’ve seen Google’s augmented reality eyewear in a variety of situations, worn by Google co-founder Sergey Brin at a charity event, in a TV interview with X Lab founder and even donned by skydivers parachuting on Moscone Center during Google I/O 2012 that saw the introduction of Android 4.1 Jelly Bean, but each time it was under then confines of Google’s own universe.

Well now Project Glass has broken free and has taken on the catwalk at New York’s Fashion Week. Diane von Furstenberg partnered with Google and the augmented reality glasses were donned by models backstage and on the runway and by members of the production team for the past week. The glasses were also donned by the designer herself who was seen sitting next to Sergey Brin during the DVF show.
END_OF_DOCUMENT_TOKEN_TO_BE_REPLACED

A Google patent that has just been published details how a wearable marker, like a ring, a bracelet or even a decal attached to a fingernail may be used to control a head-mounted display (HMD), i.e. Project Glass. The HMD includes an infrared (IR) camera that detects IR radiation reflected from the wearable marker. The wearer can perform different hand gestures, which will then be tracked by the camera and translated to actions. Pretty nifty huh?
END_OF_DOCUMENT_TOKEN_TO_BE_REPLACED

Google X Lab’s (the company’s incubator of fantastical futuristic products) founder and head, Sebastian Thrun, was at an interview with Charlie Rose, wearing his team’s latest prototype. This is of course a pair of Project Glass eyewear. On their previous appearance, Sergey didn’t actively use the headset, but Sebastian has been a bit more forthcoming.
END_OF_DOCUMENT_TOKEN_TO_BE_REPLACED 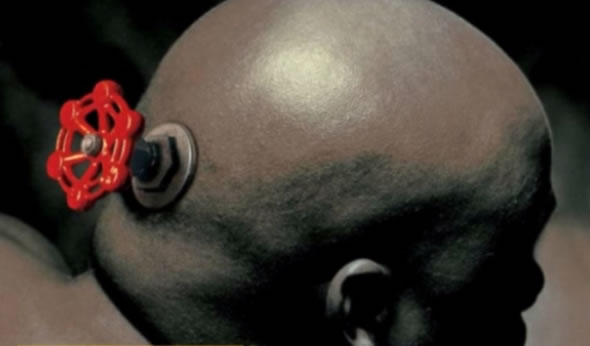 Take note as you will be hearing much more of wearable computing in the years to come. Google had just announced early this month its own exciting project to create a pair of self-contained augmented reality glasses, named Project Glass. So now, it would be as good a time as ever for other companies to share their own plans and research on the subject.

Valve Software, best known for the games Half-Life and Portal, has just come out, through a blog post by developer Michael Abrash, that it’s also started doing some R&D on wearable computing. But first a brief intro on Michael, he has been in tech for over thirty years and has worked at Microsoft as the graphics lead for Windows NT, then at Id working on Quake, then working on the Xbox and finally on Intel’s Larrabee GPU architecture. In two words, he is a real heavy weight.
END_OF_DOCUMENT_TOKEN_TO_BE_REPLACED

While revealing Project Glass, the company’s project to create augmented reality glasses, Google made known that it will be publicly testing devices. Well it didn’t take too long for the first pair of prototype eyewear to to be spotted in the wild. The glasses were donned by none other than Google co-founder Sergey Brin at a Dining in the Dark charity event.

Rackspace’s Robert Scoble spotted Brin wearing them and joined him in the above picture. Robert noted that the glasses looked very lightweight and although Brin was wearing a backpack they seemed to be self-contained. Although Brin refused to lend them to Robert, he did see images flashing in the small transparent glass display.
END_OF_DOCUMENT_TOKEN_TO_BE_REPLACED

Hold on tight as this could be one of the coolest things in tech. It’s been long-rumored that Google has been working on augmented reality (AR) glasses and the search giant has now officially confirmed the project on a Google+ page. The project named “Project Glass” is run by Google X Lab, the company’s super-cool innovation lab that has been tackling challenging projects like the self-driving car and a space elevator.

Project Glass is a first step to wearable computing, putting the information directly in front of your eyes in the form of a see-through display in a slim pair of glasses. Google is now privately testing the technology and has released a number of concept design images for the AR glasses. The clear display is located above the eye, the glasses include a camera and the skeleton sits on the bridge of your nose. Note that Google is supposed to be testing a number of designs, some of which can be worn over prescription eyeglasses.
END_OF_DOCUMENT_TOKEN_TO_BE_REPLACED