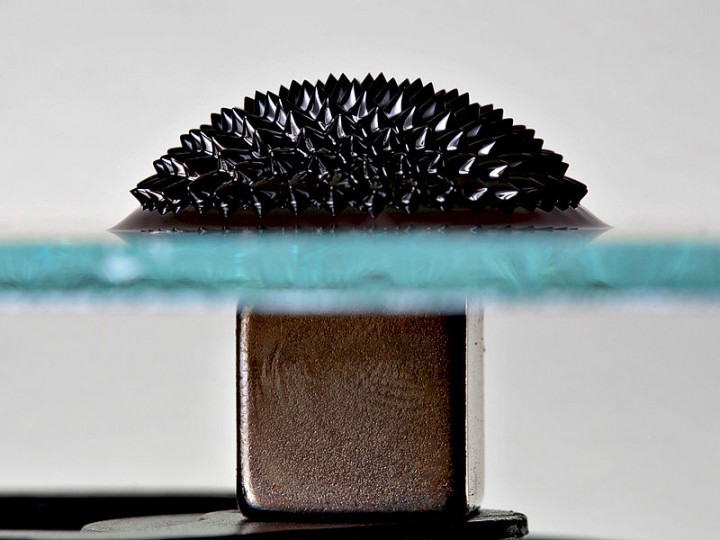 We know that Apple has a love for magnets. First, you have the ingenious MagSafe adapter, which uses a magnet to attach the power connector to your MacBook — you get a quick and easy connection and if you trip on the cable the connector unlatches so that you don’t accidentally pull your laptop to the floor. Then, when Apple introduced the iPad 2, it was paired with the new Smart Cover, which uses a number of magnets to align the cover on the device, but also put the iPad to sleep. According to some new Apple patents, filed in July 2011 but only published yesterday, the Cupertino company is looking into even more advanced uses for magnets and even ferrofluids.

The patent filling contains a huge number of potential applications for correlated (or programmed) magnets. Correlated magnets consist patterns of magnets with alternating polarity and can be programmed to interact only with other magnets that have been coded to respond. Apple engineers explore the possibilities of physically securing a data connection by including a ‘magnetic key’ on data ports, using coded magnets.

Electronic devices are common in both home and work environments. Such devices often transmit data back and forth in order to operate or share information. In many cases, data transmission is unsecured or conventionally secured by methods that are easy to defeat. Physical security of certain items, such as computing devices, also may be desirable.

Magnetic structures may aid in securing physical access. For example, magnetic doors may prevent ingress by unauthorized persons. However, magnetic security is rarely applied to securing data or functionality of an electronic device. Likewise, magnetic security is rarely used to authenticate data transmissions. Further, most magnetically-implemented security is very basic. In the door example, above, a door may be magnetically sealed but access is rarely granted through the application of magnetic principles. Rather, magnetism is used to provide the actual physical security by keeping the door closed.

And the text goes on:

Certain cords may have coded magnets at, in or proximate one end that permit them to detect an appropriately configured coded magnet in a nearby port of a device. Presuming the force curve is sufficiently attractive, the coded magnet in the cable may “home in” on the coded magnet in the port, physically moving the cable toward the port. In certain cases, the attraction is sufficient to dock or mate the cable to the port. Presuming that each cable is magnetically coded to be so attracted only to the port with which it is designed to interface, a cable may “home in” only on the proper port and ignore the others, thereby ensuring each cable is properly connected to a device.

Connectors and methods of coupling electronic devices and cables are provided. In one embodiment a cable is provided having a coupler with dynamic pins. The coupler may have a magnetic code used to identify the connector and the pins may be controlled to extend a distance to provide a desired coupling. Thus, a single connector may be used for multiple different devices.

We’re particularly intrigued by the idea of using coded magnets together with ferrofluids (liquids that become strongly magnetized in the presence of a magnetic field) in order to provide haptic feedback on a touch surface. We’ve already seen devices that can be installed below the touchscreen surface and move it to provide haptic feedbackm but this would allow for an even more localized experience. This concept would allow for a better touch-type experience on a touch device like the iPad:

Various embodiments may employ coded magnets with ferrofluids to achieve a variety of effects. Ferrofluids are generally liquids that become strongly polarized in the presence of a magnetic field. Ferrofluids may thus be attracted and repulsed by magnetic fields.

Certain embodiments may employ coded magnets to attract or repulse ferrofluids to place ferrofluids in a particular place at a particular time. As one example, a coded magnet may be activated when a proximity sensor detects a finger approaching a touchpad or other surface capable of detecting a touch. As the finger (or other object) approaches the surface, the proximity sensor’s output may activate a coded magnet beneath the portion of the surface about to be impacted. This coded magnet may draw ferrofluid to it, resulting in an upper portion of the surface rising or bulging. In this manner, the touch-sensitive surface may provide visual and/or haptic feedback indicating the touch has been sensed. Haptic feedback may be achieved because the feel of touching the ferrofluid-filled bulge would be different than touching the flat touch-sensitive surface. Further, it should be appreciated that the sensing algorithms and/or capabilities of the surface may be adjusted to account for the pool of ferrofluid.

The full text contains an immense amount of ‘dreamed-up’ applications including self-coiling cords and devices that can magically change in translucence. Though most of these application are quite far off, we’re pretty excited that Apple is actively looking into such a cool and cutting edge field.